El Cruce this year will celebrate the 12th edition. The format is a three day stage race from Chile to Argentina covering 30 – 40km per day.

Like other multi stage races such as the Marathon des Sables or The Coastal Challenge, runners will sleep in a ‘camp’ each evening. The camp is an important element of multi day racing as bonds are made and memories forged.

The ‘solo category‘ in 2013 has an impressive field assembled. It will be without doubt quite a race… Adam Campbell, Iker Karera, Max King and Francois d’Haene take on previous winners Gustavo Reyes and Nelson Ortega.

The ladies race has Frosty (Anna Frost) hopefully toeing the line feeling refreshed after a winter of recuperation. This won’t be an easy race for her though… the presence of Emma Rocca, Oihana Kortazar and previous race winners Rosalia Camargo Guarischi and Cristina de Carvallho will mean that a battle ‘royal’ will be played out over the three race days. 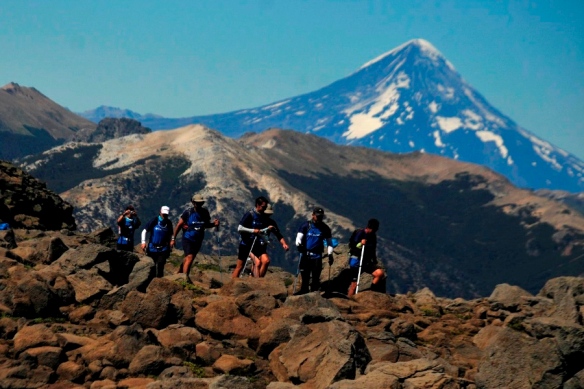 This years race sees runners race around the theme of a volcano for each stage. Apparently they will go around, up or down to make a loop. Given the name of ‘Through the Volcanoes‘ the race is billed as a tough three days. The three stages are as follows:

With plenty of vertical kilometres this race will certainly suit Iker Karera, Anna Frost and Oihana Kortazar but will Francois d’Haene after his success at UTMB and his top placing at  Transvulcania in 2012 push for the win or will the speed kings  Max King and Adam Campbell make a difference over the three days.

The Andes are a beautiful mountain range. Combined with three days of running and camp life in the evening, the 2013 edition will be a race to remember.