Stage 6 of the Costa Rica Coastal Challenge 2017 aka “The Victory Loop” and epilogue to this gruelling multi-stage race started at 7am. This allowed runners to “sleep in” a little and get some much-needed recovery before the final sprint, well, half-marathon! The final stage is always relatively short and the same distance for Adventure racers and Expedition racers. Many take this final stage easier as by now the podium is pretty much a given. An additional incentive for outsiders to race this stage is guaranteed free entry to the winners of the stage in both the male and female categories as well as the winners of each category in the overall ranking. Some race volunteers also like to join the runners in the final stage as a gesture of solidarity.

The final stage is a 22.5km representation of the whole race with all the course elements thrown in: fire trail, a magnificent waterfall, forest single track, more fire trail, beach sections and a lovely final 10km along the coast on shaded single track. With a total ascent of 613m and a descent of 613m it is a relatively flat route. There was only one CP at 22.5km. 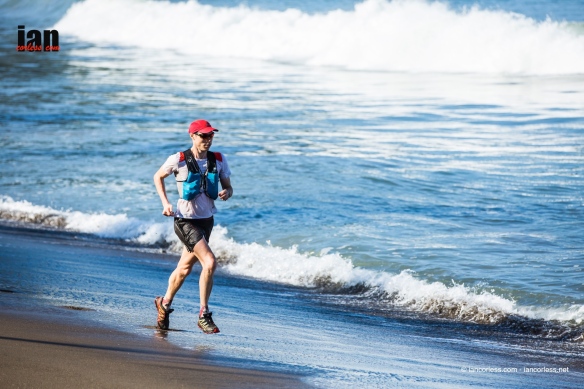 In the men’s race Tom Owens seemed relaxed chatting at the start and not too worried about racing. However, Chema Martinez had his race hat on and chased Tom right from the start egging him on. Chema had a lot of competition from the Costa Rican field especially Jorge Paniagua who joined the two leaders, battling it out with them until the final sprint, where the 3 finished barely a second of each other. Jorge was first, Chema second and to complete the stage podium Tom Owens in third position. The Costa Rican was delighted to gain a free entry to the 2018 edition and has promised to be back to perform even better.

Tom Owens was crowned 2017 champion and he was full of praise and thanks on the line.

“This has been an incredible journey. It’s a stunning and magnificent part of the world and the course, terrain, views and the racing has been world-class. I have been blown away by everything – the final stage was just stunning and it managed to compress the whole TCC experience in just 22km. I’d be back to TCC and Costa Rica in a shot…!”

In the Ladies field, Ester Alves led the race. She needed to defend her third overall position. Anna Comet followed in hot pursuit to secure her second position and not allow Ester to close the gap significantly in the overall ranking. Anna Frost then also gave chase. Elisabet Barnes who had intended to race this final stage very hard in a final attempt to secure third felt weak and tired.

“It is only once I started running hat I realized my body wasn’t responding and that my legs were tired, that I wasn’t going to be able to race this stage. I decided to consider it a recovery run as my focus is on MDS 2017 which is just round the corner. I didn’t want to compromise that.” – Elisabet Barnes

Ester Alves did not even stop at CP1 to replenish her water supply or drink.

“I decided not to waste any time and ran the last 10km full out skipping the water point. I had run out of water before the checkpoint but I wanted to gain as much time as possible. I squeezed my soft flasks but not a drop came out. It’s amazing what the body can do in this heat, running 10km on no water, when the mind takes control and the drive is there. I must admit it was very stressful and it is a stage I enjoyed last year.” – Ester Alves 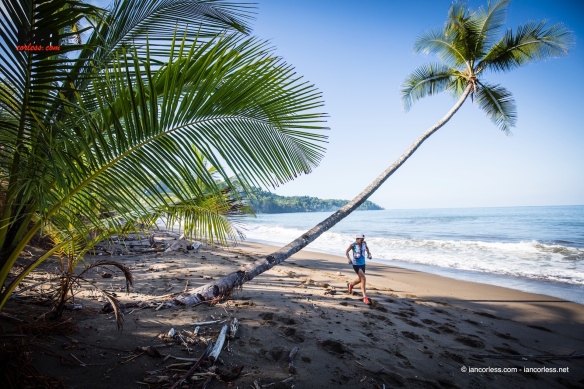 Ester led the race until the finish completing this stage 9min ahead of second lady Melanie Langer (9th lady overall) who had run hard all day. 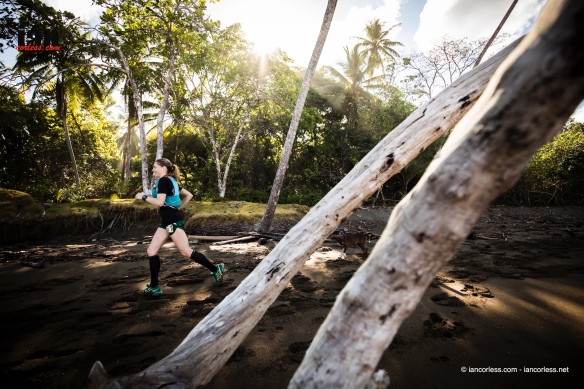 In the closing stages, Melanie took advantage of Anna Comet and Anna Frost relaxing into the finish with Sondre Amdahl – the trio had run together from half-way enjoying the closing of the 2017 TCC. Elisabet Barnes completed the stage 30min behind Ester in 6th place and 4th overall.

Anna Frost cried on the shoulder of race director, Rodrigo Carazo on the finish line. 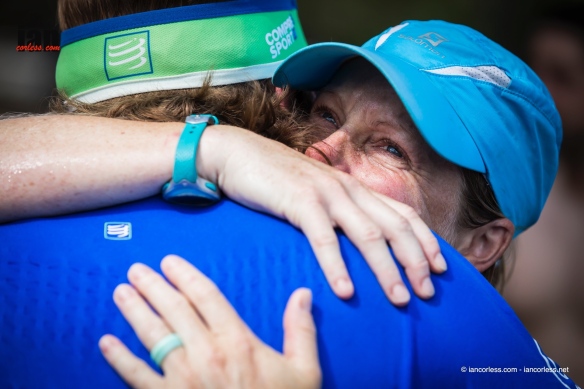 “This has been a tough and emotional journey, three editions in the making. I have finally won the race I love! I think I am done, not with Costa Rica or the TCC – next time I will be watching and spectating though!” – Anna Frost 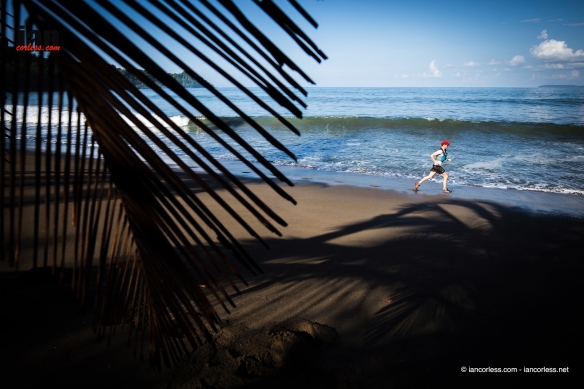 Nothing can describe the emotion of those finishing this tough 6-day multi-stage in some of the hardest conditions or the joy and relief on their faces on being handed the well-deserved finisher medal. Many have vowed to return to better their performances or tick this box.

Tonight (or this afternoon), will be a long night of post-race celebration where the ‘Imperial’ will flow and spirits will be high.

Overall Results for the 2017 The Coastal Challenge #TCC2017

Want to run The Coastal Challenge 2018 #TCC2018 entries will open soon through the official channels. Only go to http://thecoastalchallengecostarica.com

Overall Results for the 2017 The Coastal Challenge #TCC2017

Stage 2 of the 2017 The Coastal Challenge was 39.1km long with 1898m+ and 1984m-. Starting on the beach near Rafiki Lodge, the racing started just as the dawn was beginning – excited runners waited nervously for the start to be given.

A few waves to the drone flying overhead and off they went zigzagging on a sandy beach trail which took them past Rafiki Lodge and up onto the first shaded relentless climb through jungle undergrowth.

It was muggy and the climb was steep taking the runners from sea level to 700m in 4km. After that a steep technical descent on dusty jungle trail to CP1, then the second monster climb of the day on more runnable terrain to reach one of the highest points on the course at 800m waited. This was followed by a very runnable fire trail descent to CP2 and from there on the course was fast exposed fire trail to CP3 followed by the 6km beach section with 2 inlet crossings to negotiate. The finish was at Playa Dominical.

In the men’s race the mountain-running specialists Tom Owens and Jason Schlarb took the lead from the outset setting a gruelling pace in an attempt to shake off their adversaries. They were followed very closely by one of the Costa Rican favourites, Ashur Yousseffi. As predicted Tom, an experienced fell runner, shook off the group in pursuit, opening an impressive gap. Chema Martinez tried to hang on but was not in his element on the first section of the course.

He later tried to close the gap on the flat and downhill fire trail but Tom didn’t give in, finishing the stage with a 13min lead on Chema.

“I felt better than yesterday. The 600m climb was not my strong point. Tom is just so much more competitive on that terrain. Compared to last year I feel a little more in control.” – Chema Martinez

Completing the podium was Jason who took 3rd place, 7min behind Chema. A great result after his detour on day-1!  Ashur ended 4th after spending considerable time trading places with Chema. The other Costa Rican favourite Erick Aguero who had placed 3rd yesterday, finished 5th just 2min behind his compatriot. All in all, it was a very good day for the Costa Rican favourites.

In the Ladies race Anna Frost and Anna Comet, both experienced skyrunners, took the lead from the start. Frosty held the lead till the end, finishing a good 3-minutes ahead of Anna Comet. The latter was second until the first summit. She held second place all the way to the finish.

“It went well. I felt good at the beginning up the climb,” Comet said post race. “I tried to go faster uphill to put time in the bank. My strong point is technical terrain –steep climbs and descents.”

Costa Rican favourite Kateyln Tocci was 3rd lady to the summit followed by Ester Alves and Elisabet Barnes. As predicted Elisabet Barnes lost time on the climb and summited out of the top 5.

“Yesterday was great. I enjoyed the flat running and the later start. Today the climbs until CP2 were difficult. There was a lot of hiking. I didn’t enjoy it. After CP2 there were nice flat roads until the finish and the second downhill was not too technical. I had to work hard on the hills and quad-bashing technical descent to CP1. Having said this, I enjoyed it overall. Tomorrow will be a big challenge with the river bed and rock-hopping. The second half and the beach section will be better. This year I feel fitter and more heat-adapted. I gained 11 to 12 minutes compared to last year but the female field this year is stronger and much more competitive.” 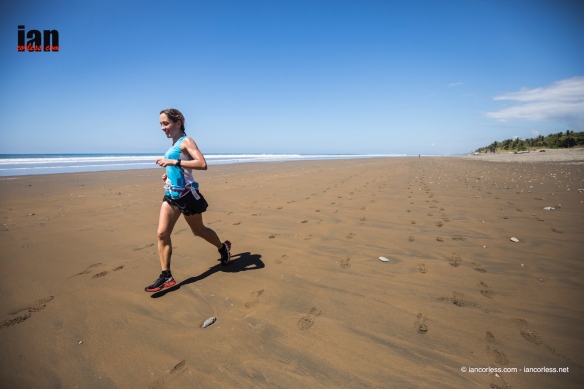 Ester Alves, also an experienced sky and mountain runner, had a better day today. “I felt better and preferred the course today. I am still struggling with the heat and hydration. I’m not used to it. Tomorrow my body will dictated my race. It’s only day 3.”

Located next to the sea, Dominical provides a wonderful overnight stop. It’s an early start again tomorrow for stage 3. The day starts with a tough river bed scramble and then passing the stunning Nauyaca Waterfalls. 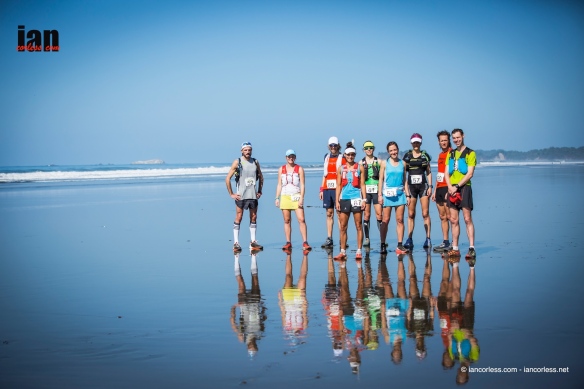 You can read the day-1 report HERE