The stunning VK course in Canazei was greeted with clear skies and warm sun as runners assembled at the start today for the 8th edition of the Skyrunning Dolomites VK.

First runners departed at 0930 but the elite runners had to wait till 1130 for the men and 1135 for the ladies before they were un-leashed on the tough, steep gradients that finish 1000m in the Sky! 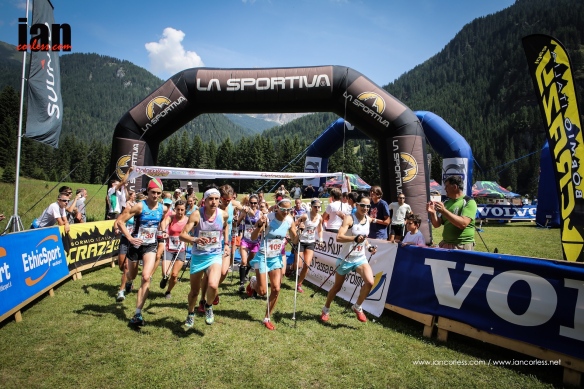 Urban Zemmer was the odds on favourite for the race and he started as he meant to go on; pushing from the front at a relentless pace that defied the gradient. However, Zemmer was not alone. Philip Goetsch slotted in behind him and marked him step-by-step.

As they approached the final 150m, Goetsch was tucked in behind Zemmer drafting like a cyclist. In the finale 50m or so, he made his move and unleashed a devastating sprint that one would have though impossible on such a steep and rutted incline. So impressive was his performance that it resulted in a new course record!

Zemmer held on for 2nd place with a clear margin and Saul Padua Rodriguez also jumped a place in the closing stages and moved from 4th to take the final podium place.

Just as Zemmer was expected to dominate the men’s race, Laura Orgue was also hotly tipped as the ladies’ winner. Christel Dewalle didn’t agree with this prediction! Fresh from the Val d’Isere VK where she podiumed, Dewalle pushed this VK course to its limits and it was clear to see the determination and dedication in her eyes. She was victorious over surprise 2nd Eli Ann Dvergsdal and Laura Orgue placed 3rd. 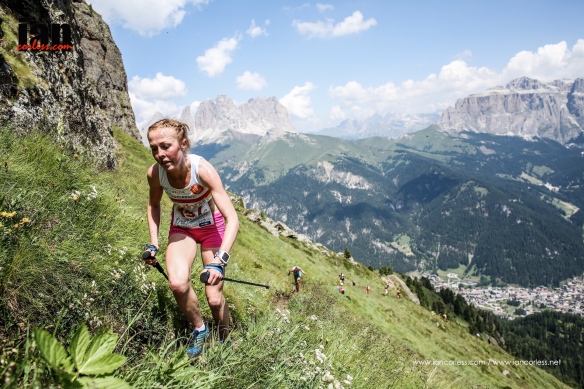 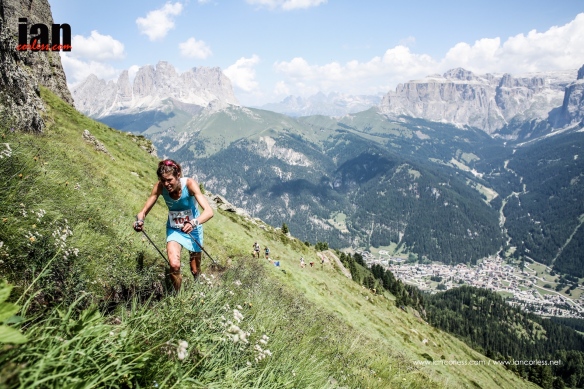 Attention now turns to the SkyRace on Sunday. Preview HERE

The field is stacked and we anticipate a battle royal in the men’s and ladies’ races.

all images ©iancorless.com – all rights reserved

Every two years the European Skyrunning Championships are celebrated and 2013 is no exception.  The big news is the inclusion for the first time of the ultra distance.  The venue is all-Italian with the Vertical Kilometer® and SkyRace® in Canazei, Dolomites on July 19 and 21, while the Ultra will take place just six days later in the nearby Veneto Region.

The Dolomites will again host two of the events in the three-year history of the Championships.  The record on the unforgiving Vertical Kilometer®course just 2,1 km long, stands at 33’16” by world record holder Italian Urban Zemmer and Antonella Confortola in 39’13” back in 2008 when the course was inaugurated.

The challenging and often technical course represents one of the toughest proving grounds for the relatively short distance:  22 km but with 1,750m climb to the summit of the Piz Boè which, at 3,152m altitude, towers above the start and finish of the race in Canazei.

The much anticipated Ultra is embodied by the Trans d’Havet, a point to point 80 km long with 5,500m vertical climb traversing the Piccole Dolomiti in the Veneto Region.  The route, technical in stretches, includes 6 km of tunnels dating back to the First World War, created by General D’Havet, to whose name the race is dedicated.

At the launch this year, the men’s winning time was 10h58’44”, no doubt destined to fall with the top European runners participating here in 2013.

Following on from the Dolomites SkyRace® on the 21st, five days’ activities and fun-packed action are being organised for runners who want to stay over for the Trans d’Havet.  More news on this later.

The European Skyrunning Championships are open with individual titles at stake in each discipline and a combined title based on the sum of the highest points scored in two out of three events. The national title is based on the score of the first three men and one woman in all three events.