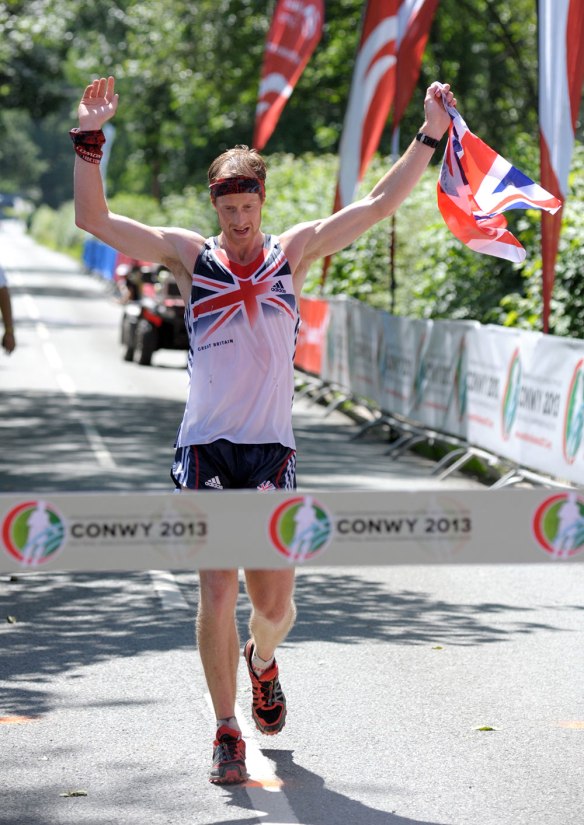 7 July 2013 – In sweltering conditions Great Britain and France dominated this weekend at the 4th IAU Trail World Championships in Llanrwst.

There was home delight as Britain’s Ricky Lightfoot won the men’s individual race by almost 10 minutes, and in doing so led the GB and NI team to a superb team gold. In the female event France’s Nathalie Mauclair was equally impressive, as she demolished a world-class field and also headed-up team success for the France women.

The day had started under cloudless, blue skies on the famous bridge in Llanrwst, North Wales, with over 120 athletes assembled, ready to take on the tough Gwydyr Forest terrain and temperatures that were to hit 27 degrees centigrade by the time the afternoon sun revealed all of its warmth. The ultra-trail running event entertained runners from 18 countries including Australia, USA, Great Britain, France and the Czech Republic all lining-up to tackle the challenging 77km route.

The pattern of the race was soon to become apparent as GB athlete Ricky Lightfoot, France’s Julien Rancon and German Florian Neuschwander led the runners out onto the first tree-lined climb and the first of five 15km loops, before finally heading back into Llanrwst.

As the runners passed through the first of the checkpoints and back to the start of loop 2 at the Saw Bench (16km), it was Lightfoot and Rancon who were clear, and the electric atmosphere of the team support arena made for a gripping and exciting viewing area, as the runners took on hydration and words of encouragement from team staff.

In the women’s race a clear pattern was already emerging as Nathalie Mauclair led through the Saw Bench, over 3 minutes up on French team-mates Aurelia Truel and Stephanie Duc.

Rancon and Lightfoot meanwhile remained locked in battle, and so it remained up to the 50k point, as the Briton began to pull away from the French athlete, and it was at this point that a heavy fall put paid to Rancon’s gold medal chances.

This left the door open for Neuschwander to begin his charge and as he passed Rancon, the German runner had Lightfoot on his radar. However, the power of the Briton was undeniable and for the next 25 km Ricky remained focused and strong, hardly putting a foot wrong and maintaining a consistent 10-11 minute lead all the way back to the finish line in Llanrwst, to take the home-crowd plaudits and obvious delight, becoming the new world champion in 5 hours 36 minutes and 3 seconds.

Behind a highly-excited Neuschwander (5:45:16) raced in for the silver, with an emotional Rancon (5:54:21) eventually crossing the line in third, realising that his fall on the technical Gwydyr course had cost him his chance of golden glory.

Speaking immediately after the race Lightfoot told the ecstatic crowd:

“I am glad that is over! The heat and the route were really, really hard today, and I was always aware that there were some great athletes behind me, so I couldn’t really relax.

“There were some time checks on the course, but I was also never really sure of just how far behind the guys were, so I just ran my own race and concentrated on finishing strong”.

It was apparent how much this meant to the British athlete who has cut his teeth on the fells of the Lake District in England, as he added:

“I really can’t quite believe it to be honest, being world champion is something you only dream of, it will take a while to sink in!”

Backed-up by fellow Brit Iain Ridgway in a superb 4th, Great Britain also triumphed in the team event, ahead of France and Germany.

Meanwhile in the women’s race there was to be no looking back for the majestic Mauclair, who gradually and impressively increased her advantage over the course of the 77km to race to victory in 6 hours 38 minutes and 45 seconds, a full 17 minutes clear of compatriot Truel (6:55:51) who took the silver medal. Italy’s Maria Chiara Parigi ran a superb second half of the race to claim the bronze medal (7:00:30) just ahead of first female British athlete Jo Zakrzewski in fourth.

The French ladies were dominant winners of the team prize too, as Mauclair and Truel were backed up bu Duc in 6th place. Italy won the team silver, with Zakrzewski leading Great Britain to yet more success and the bronze medal.

In the supporting 10km event – which also included an International match, seeing athletes from Wales, England, Scotland, Ireland and Brittany going head-to-head – there was an enthralling battle between Wales’ Andy Davies and Rob Samuel, as they swapped the lead throughout the technical and fast Gwydyr Forest tracks, with Davies (33:50) prevailing in the last 100m, just ahead of Samuel (33:53). Team-mate Alun Vaughan (34:59) made it a 1-2-3 for the Welsh boys, easily securing the team prize.

In the women’s race there was a great run from England’s Katie Walshaw (39:42), winning by over a minute ahead of Scotland’s Jenny Maclean (41:05) with Wales’ Kate Roberts (41:07) a mere 2 seconds behind in third. England won the women’s team prize.

Welsh Athletics and the Conwy Sport Development teams were also looking to the future too as they facilitated a roster of free-to-enter junior events and a family fun run, completing a festival of running and a day of which Wales and the UK could be proud.

For further information on all of the events and links to the Championship’s social media offering, head to www.worldtrailwales2013.org

The Ultra distance races selected in 2012 were held in the following countries: Andorra, France, Germany, Great Britain, Italy, Réunion, Italy, Spain, USA.  The ranking is based on the best three results of the year – or two results, plus one from 2011, taking into account the top 15 men’s and 10 women’s results in each race.

The athletes are listed in alphabetical order according to their nationality. 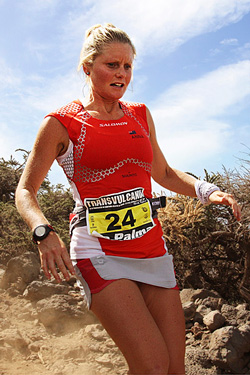