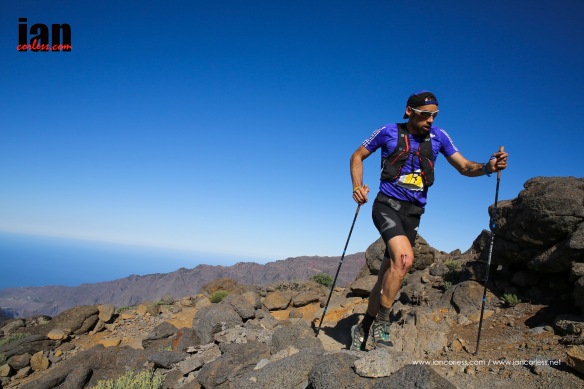 No matter which way you look at it, no matter how you write it, the 2015 Transvulcania Ultramarathon was the Luis Alberto Hernando and Emelie Forsberg show.

Kicking of the 2015 Skyrunner World Series, Transvulcania was always going to be a great race and showdown that started the ISF ball rolling.

The dynamic duo of Luis Alberto and Emelie were beyond impressive and as such have provided a great impetus for the 2015 series.

Emelie Forsberg fresh off skis (and a win at Mezzalama) lead the race from the front and slowly but surely extended a lead that extended to over 30-minutes by the time the finish line arrived in Los Llanos. ‘It was so hot out there,’ Emelie said, ‘I am fresh off skis and cold temperatures and to run in this intense heat was so hard but I am extremely happy. It’s a dream come true to win this race again.’

Luis Alberto by contrast played a waiting game in the early stage. A feisty Zach Miller went off the front trying to fulfill a pre race promise that he would win the race. But Luis kept in contact and at Pico De La Nieves he made his move opening a gap of just a couple of seconds. As the kilometers passed, the Spaniard produced a master class of mountain running and when he turned the after burners on, there was no stopping him. As he entered the final kilometers he knew the course record was a possibility and he pushed and pushed providing all those watching a skin tingling and inspiring finish to snatch the course record by a couple of minutes. ‘I took it easy; I let the others dictate and then just pulled away. I felt good the whole way and it’s just incredible to win here again. I had no problems.’

It was a day of shocks though. The men’s field was super stacked and many of those we expected to contend the podium either did not start or faded and/ or pulled out. Miguel Heras did not start, Ryan Sandes dropped early saying he had no energy and Timothy Olson, Mike Foote and so many more just had a tough day on La Isla Bonita; the beautiful island.

Dani Garcia Gomez took a surprise 2nd place and Australian sensation, Blake Hose took the final podium place showing a distinct promise of an exciting future. ‘I am more than happy,’ said Blake, ‘I was taking it easy and went through some rough patches but so did everyone else by the sounds of it. To get the podium here in this quality of field is incredible, now some short races!’

Dakota Jones sprinted for 4th ahead of a charging Zach Miller and although he improved on his 2014 performance, it was easy to see that Dakota was a little perplexed by his run. However, he was very philosophical post race.

Landie Grayling was potentially going to provide Emelie with some competition after her win at Buffalo Stampeed (in Australia) but like her South African teammate, Ryan Sandes, Landie said she had no energy. Everest Trail Race winner Anna Comet Pascua started down the field and moved her way through to 2nd on the podium, albeit 30-minutes behind Emelie. Myriam Marie Guillot Boisset placed 3rd just under 2-minutes ahead of American, Alicia Shay. Magdalena Laczak rounded out the top five.

Transvulcania with the help and inspiration of the ISF (International Skyrunning Federation) in just 4-years has become one of the most iconic and prestigious ultra marathons in the world. The 2015 edition has secured this reputation. It’s not just running; it’s an island coming together to create a beautiful harmony that celebrates running. With arguably one of the most impressive and logical (sea-summit-sea) courses, the race is a pleasure to behold. I for one am booking a place for the 2016 Transvulcania Ultramarathon; I suggest you do too!

All images ©iancorless.com – all rights reserved

Scott Running athlete, Sage Canaday has been burning a trail quite literally in all his recent races. Not only has he been winning, but he has been setting CR’s in almost all his runs. Without doubt he is in form. Along with Cameron Clayton and Adam Campbell, Sage will bring speed and pace to the front of the Transvulcania race.

However, this course is unlike any other race he has run. The long up hill sections of very mixed terrain will break his running stride, in addition, it is going to be hot. These are things that Sage acknowledges may very well throw a curve ball into his race plans. The long descent from the top of the course to Tazacorte will also not be ideal for Sage. But as he says, he is learning every day. I am sure he will learn something new on May 11th. 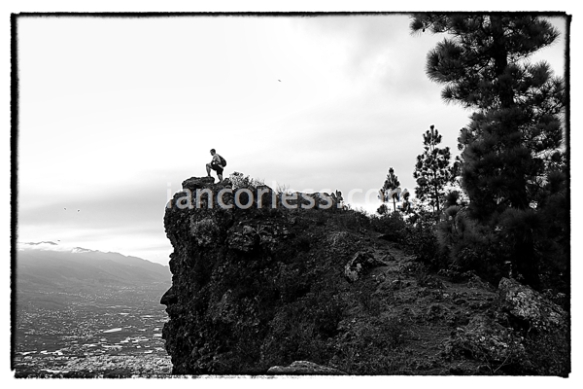 Niandi and myself have arrived on the island of La Palma – ‘La Isla Bonita’ – the home of the Transvulacania La Palma.

We are here for a working holiday. By that I mean we are here on holiday but still working as and when we feel like. We both have commitments that we need to fulfil while out on the island but we plan to be really flexible… of course I have another episode of Talk Ultra to get out. Based on how slow the wifi is here in our apartment that may be a real challenge.

Anyway, we decided NOT to to ease ourselves into this and went out for a full on 8 hours on the trail on our first day. Considering the longest run I have done in the last 17/18 weeks has been 75 min (due to dodgy knees) that was somewhat optimistic. However, I knew that this was not gong to be a run… more of a tough long hike with some jogging (mostly downhill).

The Transvulcania course starts in the south of the island and heads up the spine to the dramatic Roque de Los Muchachos at 2426m and then from here you basically have a 32-36k drop back to the sea at Tazacorte and then a run into the finish at Los Llanos.

Niandi and myself don’t have the luxury of multiple cars or drop/ pick ups so pretty much all our days out will be out and back.

Today we went from the sea at Tazacorte Port and went straight up to 2400m, had a picnic, turned around and came straight back down.

An incredible day on the trails and while friends back in the UK struggled with snow and ice we had T shirts and shorts on for the whole trek. The course offers some tough technical terrain, the views are dramatic and once above the cloud one really does feel like a ‘Skyrunner’ quite literally.

I personally had a great day. The longest on my feet for months BUT dropping from 2400m to sea level in one go DID test the knees. It wasn’t pretty at times but I am happy.

Here are some images from the day:

No warm up, from Tazacorte you go up for 18k

Caves in the rock face – once homes!

Niandi has a break

Running through the cloud was incredible

After 7 hours on the trail, with just 1 hour to go we get to see the sun disappear.